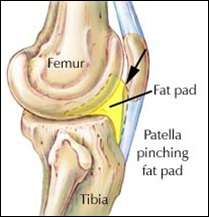 The infrapatellar fat pad, also known as Hoffa’s fat pad, is an intracapsular, extrasynovial structure that fills the anterior knee compartment   The structure itself separates the anterio-inferior synovial membranes from more anterior knee joint structures. Two main functions include adipose tissue space filler protecting exposed articular surfaces and facilitation of synovial fluid distribution within the joint. The infrapatellar fat pad (IFP) has high vascularization with the central portion being the least vascularized.  This rich vascular supply of the IFP is believed to be a healing aid to structures nearby most commonly the anterior cruciate ligament. However, this can cause anterior knee pain with subsequent fibrotic tissue after IFP injury.   The IFP is also described as a highly innervated structure of the knee anatomy along with its relationship to the innervated synovium.  Anatomy literature indicates that the posterior articular nerve, terminal branch of obturator nerve, reccurent peroneal brances, and brances of the saphenous nerve all have innervated portions along the IFP (4,5).  Irritation of the fat pad using hypertonic saline has been studied throughout the literature.  Bennell et al concluded that an injection of 0.2-0.25 ml of 5% hypertonic saline into the medial infrapatellar fat pad produces moderate to severe pain in the anterior knee region of individuals with no history of knee pain (2). The distribution of pain reported was consistent with anterior pain behind the patellar tendon ranging in size due to individual IFP sizes (2).  The IFP is a common source of pain with implicated inflammatory responses leading to sensitized free nerve endings either due to excessive mechanical load or other trauma

Hoffa test:  Firm pressure applied with the thumb inferior to the patella outside the margin of the patellar tendon with the knee in, (a) 30-60 degrees of flexion (b) fully extending, and increased pain in the infrapatellar fat pad indicates a positive test.  Repeat test on both medial and lateral sides (6).

o   Either by ascending stairs or after prolonged flexion (sitting)

Based on the structures highly vascularized and innervated structures literature lacks concrete prognosis or outlook of infrapatellar fat pad inflammation.  There are many nonoperative and operative treatments to consider based on patient demographics and presentation.