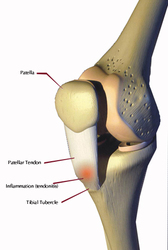 Osgood Schlatter’s disease (OSD) is a common cause of knee pain in children, especially young athletes, between the ages of 10 and 15. The disease occurs most commonly during a period of rapid growth called the apophyseal stage of bone growth and this correlates with the common age presentation being 12 and 15 years for boys and 8 and 12 years for girls.1 It is described as a traction apophysitis of the tibial tuberosity due to repetitive strain from the quadriceps muscle. Chronic avulsion of the tibia occurs as a result.2 The condition is caused by stress on the patellar tendon at the attachment site to the tibial tubercle. Demirag et al have suggested that OSD is associated with the anatomical position of the tubercle and is more prevalent in individuals with patellar tendon attachment sites that are more proximal and broader, lying above the tibial physis.3

OSD is typically diagnosed based on physical examination findings and symptoms. X-ray testing can be used to diagnose the condition but is more commonly used to document the status of the calcification at the site of insertion of the patellar tendon on the tibial tuberosity.

Signs and symptoms of OSD include:

Most cases of OSD will resolve by themselves after weeks or even months. The incidence of OSD in adults is very rare. Typically, once the child has finished growing symptoms associated with OSD will go away. Krause et al. showed that nearly 90% of patients treated with standard conservative care experienced symptom alleviation at approximately 1 year after the onset of symptoms.4

1.  Blankstein A, Cohen I, Heim M, et al. Ultrasonography as a diagnostic modality in Osgood-Schlatter disease. A clinical study and review of the literature. Arch Orthop Trauma Surg. 2001;121(9):536-539.