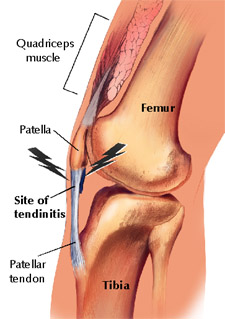 “Patellar tendinitis (jumper’s knee) is an insertional tendinopathy most commonly affecting the patellar tendon’s origin on the inferior pole of the patella.”1  While this symptom may be commonly referred to as patellar tendinitis, this is in fact a misnomer.  This is due to the fact that  “There is a common misconception that symptomatic tendon injuries are inflammatory; because of this, these injuries are often mislabeled as tendonitis.”2  This does not mean that acute patellar tendinopathies do not exist, it just means that it is more common to encounter patients with chronic symptoms.  Because of this, it is important to consider multiple classes of patellar tendinopathies.  These classifications should include acute tendintis, chronic tendinosus with acute tendintis, and chronic tendinosus.   “In most cases, the tendons of patients suffering patellar tedinopathy appear to have a tendinosis, a degenerative condition that would be expected to heal more slowly than an acute inflammatory condition.”3  This degenerative damage usually occurs at the osteotendinous junction, but can happen throughout the tendon.  Degeneration is thought to occur because “tendons are relatively hypovascular proximal to the tendon insertion.  This hypovascularity may predispose the tendon to hypoxic tendon degeneration and has been implicated in the etiology of tendinopathies.”2  Histologic descriptions of tendinopathies have demonstrated disordered collagen arrangement together with increased proteoglycan ground substance and neovascularization.  It is unclear if these chronic degenerative changes are preceded consistently be an acute inflammatory response.2

Tendinopathies are commonly seen in athletes such as volleyball players, can be seen in athletes at all levels of competition, but seem to be most prevalent in jumping athletes.  “Athletes whose sports involve repetitive sudden ballistic movements of the knee may develop anterior knee pain associated with tenderness at the inferior pole of the patella.”3  These repetitive ballistic movements result in microtrauma to the tendon due to the extreme forces that occur during acceleration, deceleration, jumping, and landing. “A higher prevalence is noted in sports with high impact ballistic loading of the knee extensors.”4  Factors thought to contribute to a patellar tendinopathy include strength imbalance, postural alignment, foot structure, reduced ankle dorsiflexion, lack of muscle strength and flexibility, increased physical load, increased repetitions, increased intensity, and increased training duration.

The diagnosis of a patellar tendinopathy is based on a clinical assessment including history, inspection, palpation, range of motion testing, resistance of muscle contraction, and functional testing.  Wilson and Best recommend that “examination should include thorough inspection to assess for swelling, asymmetry, and erythema.”2  Following a thorough inspection, the clinician can move towards palpation of the affected tendon.  According to Kahn et al., “the key physical finding in patellar tendinopathy is tenderness at the inferior pole of the patella or in the pain body of the tendon.”3  The decline squat test can be used as a functional assessment that should produce a comparable sign.  While some clinicians may wish to pursue imaging to confirm a clinical diagnosis of a patellar tendinopathy, according to Cook and Kahn, imaging is not necessary as “abnormal imaging does not indicate absultely that the pain is coming from the tendon.”6

Prognosis depends on the type of injury.  An acute tendinitis can be expected to resolve relatively quickly while a chronic tendinopathy can take much longer.  Evidence in the literature states that the prognosis can vary depending on the patient from 6 weeks to 6 months depending on the degree of degenerative damage.